Okay, so this nukige is a bit of an odd duck. On one hand, it’s very good fap material and I discharged a staggering amount of bodily fluids playing it. At the same time, though, a lot of it just made me go “why?” because the game feels like it suffers from an identity disorder of sorts. So, in celebration of Nukige November (which I have just made up), let us briefly talk about the last day of summer in the middle of autumn.

My major problem with the above is that it’s presented very poorly, and especially if your primary goal with this game is to get to the sex (which I assume covers about 99% of you, myself included), it might even be frustrating. I mean, first off, the game is trying to awkwardly cram this bittersweet mystery story into the whole thing and there’s… there’s just no need. Just let me whip out my dick and do my business. Bluntly put, this game is a huge offender in the “can we get to the porn already, please” category. Anyway, so the basic premise is that there’s this house out in the countryside and you, as the MC, come to live with two sisters, Chika and Haruka. And initially their mom, too, but she soon leaves. The first half is essentially just walking around the house with a really tedious and cumbersome interface, talking to the sisters, having lunch together, going on some trip together, watching TV together, doing banal shit. It’s not very interesting and doesn’t help much in potentially fleshing out the girls or the MC. Occasionally, there will be very vague and ominous flashbacks and minor scenes that try to foreshadow the tragic backstory I was talking about. I will say this in the game’s defense, though: it does at least give you one of its best ero scenes at the very beginning (Akiko, the mom and resident best girl, essentially bangs you before she leaves for good), but then for the other 90%, you have to slog through the slice of life stuff to get to the second half where all the sex is. The blue balling is real.

Anyway, so about the actual ero scenes. Akiko has only one (a fucking tragedy to rival Hamlet, if you ask me), Chika has five, Haruka has one, and the remaining two are threesomes involving the MC, Chika and Haruka. So I guess if you count those you could say there are seven Chika scenes and three Haruka ones but let’s not complicate things. Now, nine scenes might not sound like much on paper, but some of them have several phases with different positions and such, so there’s that. I assume the Ultra Edition additions are to be thanked here. 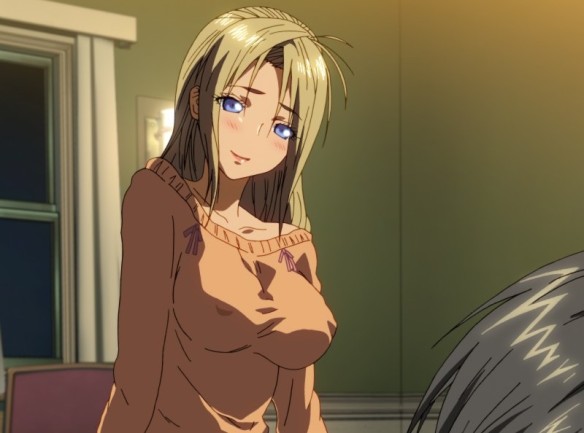 Another thing is that there’s no chemistry between the girls and the MC, and the heroines themselves have no unique or cute personality quirks that might enhance the ero. Hell, they barely even talk during the H scenes, it’s mostly just slurping and moaning. And I actually had to stop and think about whether or not the MC was a silent protagonist, since I barely remembered him talking… or doing anything at all, lol. So it’s really all about the raw sex and not much else. The animation is nice and it’s admittedly very sexy, but there’s no (and you’ll have to excuse me for using this word) moe factor, so to speak, or nothing that would elicit this kind of reaction, which is a shame considering I recently got done playing Bishoujo Mangekyou, where that kinda stuff greatly contributed to my enjoyment of the VN.

A potentially important thing to note is that the game has no narration and descriptive lines, not during the sex nor during the story/slice of life scenes. This means that during porn scenes, you’re basically just watching an anime while the text goes “slurp slurp slrrp nmhm ah ah”. The text itself doesn’t last very long either, so if you’re clicking past it too fast instead of savoring the animation, the porn scenes will end very quickly, lol. The focus is entirely on the visual side of things and not on the text or dialogue at all, so if you enjoy reading sexy descriptions or narration about what’s going on in the heroine’s mind, well, you won’t find it here. As I’ve said, it’s essentially just an anime with an interface. This also means two things: one is that the game can be finished very quickly. This is most definitely one of those nukige that depend heavily on you savoring the ero scenes and coming back to replay/re-use them whenever the… hunger overcomes you, so to speak. I mean, that applies to other nukige as well, but it applies very strongly here. Secondly, its heavy dependence on the animated sex with little to no text also means that even if you don’t know a lick of Japanese, you can still very much enjoy the main highlight of the game, that is, the ero.

Anyway, if you’re really curious about the story of Sisters, sure, you can read it. But it’s pretty bare-bones and predictable, plus it’s an absolute fucking chore to get through. And while I know we usually don’t play nukige for the story, this is one where you definitely do not play it for the story, even though it makes an attempt at telling a serious one. Truth be told, the game might’ve been better off as a standard H anime, although the VN format does allow you to let the ero animations play indefinitely on loop until you’re satisfied, so it has that going for it. Also, I feel the story would’ve functioned much better if it went with a simple “guy moves in with two horny chicks, proceeds to bang them 24/7” premise instead of trying to maintain this uneasy melancholy atmosphere.

In conclusion, I’m a little conflicted when it comes to this game.