I know I normally don’t do manga reviews, but since this is Muramasa, I had to make an exception.

Note: My reviews for the other two Muramasa manga adaptations can be found here: Makai-hen — Minagoroshi

The one we will discuss today is Eiyuu-hen (“Hero” arc), which is a three-volume manga focusing primarily on the character of Ayane Ichijou, as you would expect. If you’re not familiar with the VN’s story, you might not want to proceed — there will be spoilers.

Also, I know you’re wondering if I’m suddenly the Technologically Impaired Duck or just plain stupid for taking pictures of my monitor, but there’s a reason for it — there’s some sort of anti-piracy protection on the ebook version I bought, and it blocks any and all kinds of screen capture software including the Print Screen button. Yes, really. I did, however, want to show you guys some of the cool artwork to illustrate how good it is, so this was the only way to do it. I think.

Sh-Shut up and enjoy the pretty pictures. It’s n-not like I did just for you guys or a-anything.

(you can click on them to view in full size)

(Btw, I am somewhat disappointed with the ebook version I got — its resolution leaves much to be desired, and some of the smaller text bubbles become a pixelated, blurry mess once you zoom in on them, making them quite hard to read. Some pages genuinely made my eye hurt. Most of the manga uses a large enough font to be readable, thankfully, and if you know the VN’s terminology and political mumbo jumbo then you won’t even need the furigana at all. And considering this is a “for fans” release, I would expect that to be the case for most readers. Still, I figured I’d give a fair warning.)

In any case, let’s actually talk about these volumes. Story-wise, it’s sort of a mixture of both the Hero and the Tyrant routes of the VN, in the sense that it’s about Ichijou (and the story ends in the same bittersweet way her route did), but Kanae is also alive, and Kageaki spends most of the volumes as his “evil” Rokuhara self accompanied by his semi-waifu Chachamaru, as seen in the Tyrant route. It’s a complete mixture and rearrangement of scenes fans will all be familiar with, all while mixing content from multiple routes in the process — this all made me consider that they could very well make an anime version of the VN like this. SO WHY ISN’T THERE AN ANIME YET. C’MON JAPAN, DON’T LET ME DOWN.

This, however, also means, that these volumes are 100% for fans only. If you haven’t read the VN, I’m willing to bet you will be kinda lost as to what’s going on, why these things are going on, who these characters are and why you should feel attached to them. I mean, of course, some basic explanations are given regarding the setting and certain characters’ backstories, but still… I think familiarity with the original is strongly recommended nonetheless. Hell, even the manga itself (through Chachamaru) tells you that you should go and read the PC game if you want to know more. The manga starts very much in medias res and then proceeds to jump in the Muramasa chronology a couple of times (for example, parts of Chapter 2 are shown to flesh out Ichijou’s backstory a bit). However, things are changed up here as well: for instance, Ichijou goes to visit her grandmother’s grave in the cemetery and meets Nagasaka Ukyou, much like in the novel, but Yagenta is nowhere to be found (he’s not in the manga at all), and after Ukyou attacks her, Kageaki swoops in to save her.

Similarly, it is actually Ichijou that goes off to return Kageaki to his older, non-Rokuhara self, although she is accompanied by spider Muramasa (sadly, humanoid Muramasa makes no appearance in this, much to my disappointment), but the rest of the scene plays out very much like in the VN (except it’s Ichijou/Masamune that fight Chachamaru’s “true form”). The whole “infiltrate the Rokuhara HQ” arc is also in this, but instead of Kageaki and Ichijou, it’s Ichijou and Kanae doing the infiltration. Sakurako also makes an appearance, including her you-know-what scene with Doushin — except she doesn’t get violated this time, because Ichijou decides to just don Masamune right there and fight Doushin. Good for you, Sakurako.

Also, there is Hikaru.

Because who doesn’t love Hikaru.

In fact, most of what the characters say are word by word taken from the game, so the they all remain consistent with their game selves. The manga also features some fight scenes, complete with some of the tactical descriptions found in the VN (although not in that much detail), and the good old political infodumps also make a brief return for a page or two, just to make the experience complete, and show that whoever made this was very much aware of the source material.

So in that sense, this manga is perfect in delivering a Muramasa adaptation — really, my biggest gripe is that it has little to no new content in terms of story, since it’s really just a re-telling with a few very minor tweaks, and that it’s only three volumes, meaning it feels rushed and cannot adapt *everything*. The enjoyment of the volumes comes from already knowing the VN, and seeing some of its iconic scenes fully visualized by the truly amazing artwork. Yes, the artwork is pretty good and I’m overall quite pleased with it, but I think the screenshots posted are convincing enough. The characters all look like their VN counterparts, and since this is a manga, this also means that they are far more expressive — in the VN, all characters are limited to one or two sprites that don’t really change, but here, the manga artist could draw a wide variety of cool expressions for them, which was really nice to see. This also comes with the manga version of scenes that didn’t get separate CGs in the game, such as the first meeting between young Chachamaru and Hikaru, when the latter proposes they destroy the world together.

Basically this is the closest thing to an anime adaptation at present, so I was a happy camper for that reason alone. It still could’ve been much more, but I realize a full adaptation of a VN this insanely long is pretty much out of the question.

So what did I think of it and who do I recommend it to? You know I love Muramasa, so naturally, I’ll like this as well. However, I do realize its shortcomings. First off, it doesn’t tell an original story, so go into this knowing that it’s just gonna be a re-telling, and a very quick one at that, limited to only three volumes so *many* things are cut out. If you expect completely new things from this, or if you expect a *full* adaptation of Ichijou’s route from start to finish, you will be disappointed.

Additionally, there is no humanoid Muramasa. This is a grave sin. And finally, if you haven’t really read the VN, I would not bother with this, for reasons already mentioned above. It’s pure fanservice for those that just want to see the characters they know and love adapted to a different medium — for them, it’s a decent little extra after the VN. Imagine an OVA adapting 30 or so minutes of your favorite manga — sure, fans will love it, but others might find it lacking without the context and pre-existing attachment to the setting and characters. That’s pretty much what this is. 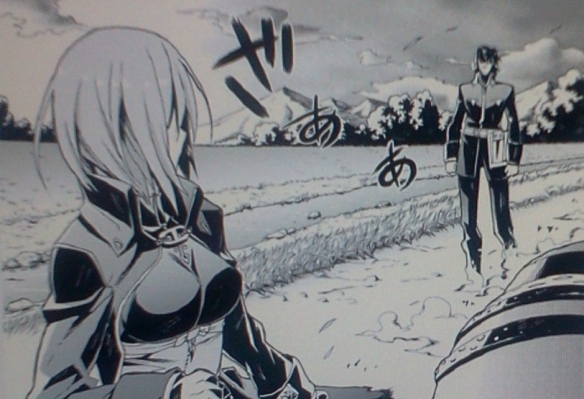