JP title: 英雄伝説 空の軌跡 the 3rd
The Legend of Heroes: Trails in the Sky the 3rd

So now we finally come to this game, the black sheep of the Sora no Kiseki trilogy. Why black sheep? Well, because it’s actually quite different from what one might expect from a Kiseki title after Sora FC and SC. And many people may or may not like that. In fact, 3rd might as well be considered a separate game, rather than a sequel to SC itself, even though it does chronologically take place after the events of SC. Either way, let’s get started.

First off, you no doubt have several questions, the first one being something along the lines of “but the story of Estelle and Joshua ended in SC, right?”. You’re right. Well… sort of. They’re not the protagonists anymore, that much is true. In fact, the main plot of Sora no Kiseki the 3rd revolves around the backstories of Kevin Graham, (the priest who played a semi-minor role in SC) and his childhood friend, Ries Argent. Anyway, Sora 3rd is often called a dungeon crawler and a “fandisc”, and if I’m to be honest with you, I gotta say both of those statements are more or less true. That’s not to say the game has no story whatsoever (it has plenty), but… it’s not quite the same. Still, Kevin and Ries make a nice main duo, I think, and I did enjoy the chemistry between them, so they definitely make the absence of Estelle and Joshua as protagonists quite bearable.

At the start of the game, Kevin and Ries end up being trapped in a secluded dimension, Phantasma (one big dungeon, basically) with no idea why they’re there and how to get out. So they start exploring, floor by floor, eventually discovering that more than just a few friendly faces have also been trapped in this mysterious world. So yeah, that includes Estelle and co. In fact, the number of playable characters in the game is insane (sixteen in total): basically everyone who has ever been playable can join your party here, plus a few extra characters like Mueller, Renne or Richard. Yes, that Richard, and yes, he’s fucking OP as fuck. I basically nicknamed him THE BEAST after a while, because holy shit he can hit like a freight train. The number of playable characters is rather there for fanservice than anything else, just so no one feels left out. Many cutscenes are actually designed so that every single character at least gets a speaking line somewhere, once again, so that no one is left out. Basically, regardless of who your favorite was in the previous games, you’ll get to see them here, and in classic Kiseki fashion, dialogue will change slightly depending on who’s in your battle party. Hell, I actually barely ever used Estelle and Joshua in my party during the game (I preferred Richard and Renne for gameplay reasons) and I kinda regret not being able to see their comments during various events. Oh well.

The Beast in action. Kicking ass and taking names like no one’s business.

To elaborate further on why this game is a fandisc, I need to mention how most of its story content is delivered. Basically, you’ll be making your way through the various floors of this huge dungeon, with the main story unfolding very slowly as you do. During your explorations, however, you’ll come across various magical doors that (when the criteria for opening them are met), will reveal a specific side story focusing on certain characters from the Sora world. There’s quite a few of these, and many of them can be 30+ minutes long, so if you’re worried that this game is just pure dungeon crawling with no story content, well… don’t worry, lol.

The side stories can be kinda hit and miss, but I guess I enjoyed most of them. There’s a story dealing with Estelle and Joshua during the aftermath of SC; another one (probably my favorite) is about Kloze’s first weeks/months as a freshman at the Royal Academy, showing how she eventually became the person she is when you meet her in FC; and there’s another one focusing on the relationship of Agate, Tita and her parents. Because yeah, Tita’s mother actually shows up here and is a pretty cool character, haha. Then there’s side stories dealing with the lives of various minor characters like the orphan kids or those three Raven gang members, and so on. Anelace gets a short chapter dedicated to her and (in another favorite mini-episode of mine) we even get to see a flashback of young Schera as a rookie Bracer. Overall, the episodes aren’t anything earth-shattering but they’re nice little extras to flesh out the existing characters even further. Hence the “fandisc” label. 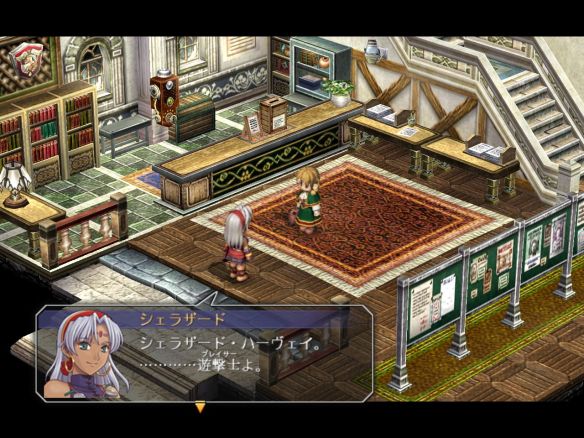 Other than these episodes, though, you’ll certainly be spending most of your time dungeon crawling, as the story of Kevin and Ries only starts to really get going near the end. But I guess that’s precisely why the side stories are there, to give you a break from said dungeon crawling. Much of the gameplay content is also lifted directly from FC/SC, so you’ll be revisiting many of those games’ locations and dungeons. Welcome to Recycle Town, basically. This aspect of the game gets really tedious in one of the later chapters, where you’ll just be soldiering through the same old dungeons from SC with a bossfight around every corner, clearly shoehorned in just so the devs can reuse all the major bosses from SC all over again. Once again, much of this is fanservice. You wanted to fight Cassius to see how tough he really was, but the storylines of FC/SC gave you no opportunity to do this? No problem, Sora 3rd has you covered with its arbitrary bossfights. (spoilers: he’s pretty fucking tough)

Also, seeing how you’re in one big dungeon the entire time, there are also no towns, no NPCs, no Bracer side jobs and all that stuff — the previously mentioned side stories are what stand as a substitute for those, sort of. But not really. I was also not a fan of how the game forces you to use ALL sixteen characters in the final dungeon, making you split up into four parties of four. So all those characters you neglected to level? You gotta use ’em now. As someone who generally likes to use a small number of preferred characters, I’m not fond of design decisions like this. I didn’t like it in the final dungeon of FFVIII, and I don’t like it here, either.

Storyline-wise, the game is not too bad. Kevin’s backstory is sufficiently dark, and if, after playing SC, you thought he was just the resident happy-go-lucky dude with the accent, this game might change your mind. Ries is also a nice heroine and like I implied earlier, her relationship with Kevin is pretty cute, so it’d be awesome if future games brought both of them back. Well, maybe they do, I honestly didn’t check. (Update: They have brief cameos in Ao no Kiseki) One particular backstory in this game also includes the kind of stuff I’d generally expect to see in an 18+ eroge, not a light-hearted JRPG — in fact, this bit was censored in the PSP port, so make sure to play the PC version. The 3rd’s ending also kinda-sorta leaves the Estelle/Joshua/Renne relationship at a bit of a cliffhanger, and it’s not until Zero no Kiseki that this particular plot thread is properly wrapped up. By the way, length-wise, Sora 3rd is more or less on FC’s level, so roughly 50-ish hours.

So that’s Sora no Kiseki the 3rd in a nutshell. Very much a “for FC/SC fans only” release, all things considered, but seeing how that description fits me, I had a decent enough time playing through this, even if it wasn’t as good as SC. But hey, if you’ve come this far, you might as well give this a shot before jumping into the Zero/Ao story arc. It’s a nice sendoff to the characters of the Sora trilogy, and it definitely has that “one final adventure with the gang before we part ways for good” feel to it.

11 thoughts on “[Review] Eiyuu Densetsu: Sora no Kiseki the 3rd”