Believe it or not, despite the spinoff-y title (and this is sort of a spinoff/fandisc), NariDanX is actually a sequel to the events of Tales of Phantasia X.

Now, you might be thinking, “did Phantasia really need a sequel?” and the answer is… well, no it didn’t. I mean, not really. But without this game we wouldn’t have Rondoline, so shush. Its existence is justified as far as I’m concerned.

On a more serious note, this isn’t a sequel to Phantasia in the way you might think. While it does take place shortly after Cless and co. defeated Dhaos, it instead focuses on Dio and Mel, two twins living in a little cottage with their sort-of-surrogate-mother, the fairy Etos (voiced by the lovely Tamura Yukari). Dio and Mel actually live in the relatively far future of the Phantasia world (100 years after Cless’ era and 50 years after Suzu’s era) and read about Cless and his heroic exploits in books and stuff. So as you can imagine, time travel eventually comes into the picture and they end up journeying across timelines to meet their heroes. Rondoline (official title: Sexy Oneesan) also shows up again… by literally falling out of the sky. Remember when she got hurled off into another timeline by Dhaos near the end of Phantasia X? Well, this game is where she ended up. 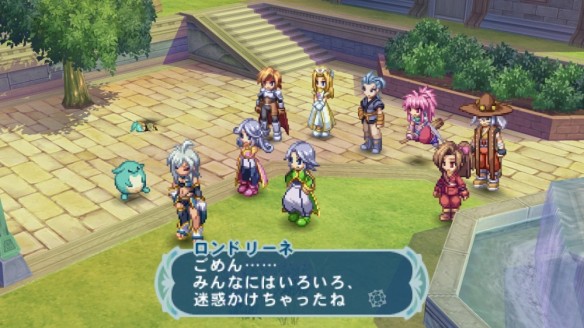 You might also be wondering what the main conflict is in NDX, and honestly… there really isn’t one. Or at least not in the “we must do this or the world will end” kind of way. The first half of the storyline is just about Dio and Mel trying to fix some local magical bullshit they accidentally unleashed, while the second half is about them learning more about themselves and then dealing with everything that new information entails. It’s sort of a growing-up story in that sense. And that’s fine, but here’s the thing: this main plot is roughly 30 hours long, and nothing fucking happens in the first 15. Dio and Mel journey across timelines and meet all the Phantasia heroes one by one, occasionally collecting a few summons and tackling a minor villain or two here and there, but nothing really stands out. Then the storyline reaches an end point, you even get an early credit roll, but then it goes “wait, there’s more!” and the plot continues. And this is where the actual plot, dealing with Dio and Mel’s origins, finally begins to take off. When you’re already 15-20 hours into the game. Yeah.

The second half is decent, though still nothing special, so don’t expect to have your mind blown or anything. It does, however, flesh out Dhaos more than the original Phantasia and goes into a bit more detail about the circumstances of his home world, Derris-Kharlan. What Phantasia hand-waved away in a single sentence actually gets slightly more development here, and you learn about the exact reasons behind Dhaos’ actions and what led to him coming to Aselia. Other than dropping some big reveals about Dio and Mel, this story arc also reveals Rondoline’s past and finally explains how she fits into the picture. But just to be clear: I don’t mean lengthy infodumps or anything. The game gives you just enough information to have a general idea of what went down, but that’s it. NDX, on the whole, is pretty light on the story, especially compared to other, meatier Tales installments.

The time travel aspect of the plot is also entirely pointless and isn’t utilized in any meaningful way; it was probably only implemented so you could recruit all the ToP characters since they’re all from different time periods. It doesn’t help that the game lacks a 3D overworld and instead just has a 2D map screen where you select your destination from a menu. There’s basically no sense of adventure anymore, and all the periods kinda just blend together. The number of locations you’re able to visit has also been reduced: if you expect to be able to revisit every single Phantasia location, prepare for a disappointment. You get a small number of towns/villages, a bunch of dungeons, and that’s it. And before you ask, yes, the towns are also pretty lame: they feel small and claustrophobic, and most houses (save for shops) are inaccessible, which is one of my JRPG pet peeves. Let me barge into every single home like a barbarian and rummage through people’s belongings, gosh dang it!

As for the characters… well, the game is largely about Dio, Mel, Etos and Rondoline, with the Phantasia cast being reduced to a minor/supporting role, and that’s perfectly fine by me. I mean, they weren’t super interesting to begin with, and they already had their game. While I don’t think I’ll ever list the NDX cast among my all-time favorites, the family dynamic between Dio, Mel and Etos was pretty cute, with Dio being the reckless, hotheaded brother, Mel acting as the smarter and somewhat more timid sister, and Etos filing the role of the dutiful Mama Fairy watching over the two. Rondoline/Rody was also pretty nice: her interactions with the twins and the ToP cast (mostly via skits) are amusing, and her personal story arc is really bittersweet, but… she only gets a few brief flashback scenes and that’s it. The game even completely forgets about her existence in the ending, and while the fate of Dio and Mel is pretty clear, the (otherwise very short) epilogue never shows what happened to Rody or what she did after the final boss was defeated. She’s not even mentioned at all! Like, what the hell. It seemed like the writers kinda just swept her under the rug after her personal arc with Dhaos was wrapped up a bit earlier in the storyline and figured people wouldn’t care. Well, I care. Grumble grumble. 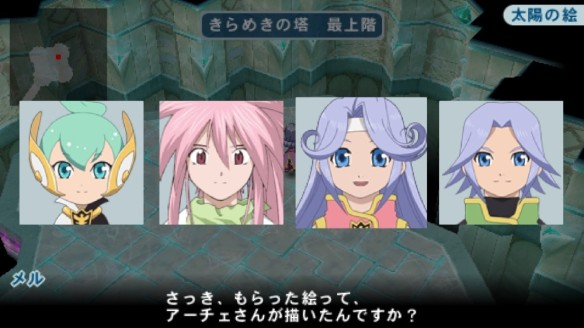 Gameplay-wise, NDX is both good and bad. It’s good because the battle system is actually pretty fucking neat. It’s probably one of the better 2D Tales battle systems, with lots of flashy, fast-paced skills, combos, and some insane air juggle possibilities. But it’s also bad because the dungeons and the overall world design are kinda meh. First off, the game completely and unashamedly recycles tons of dungeons from the original Phantasia. Sure, they look different due to the new engine, but they have more or less the exact same map layout. This is understandable lore-wise, since they’re still the same places they were in Phantasia, but not much was done to reinvent or spice them up, which means that if you played Phantasia recently, it’s gonna be really fucking boring soldiering through places you’ve already cleared in the previous game. Anyway, the bottom line is that while I played through the original Phantasia in a rather speedy fashion, with NDX, I kinda struggled to stay interested, and part of that is because of this. And the whole “nothing interesting happens in the first half” bit I mentioned earlier. There’s only so much a solid battle system can do to keep me engaged.

There’s also a pretty robust costume system that lets you change Dio’s and Mel’s outfits to turn them into various job classes that all have their own lineup of artes and spells. In a sense, it’s pretty similar to the Dressphere system in FFX-2, I guess. You change outfits, which then defines what your character will become, be it a warrior, mage, lancer, archer, ninja, monster tamer and so on. While you can technically just stick to your favorites, the game gives you an incentive to play around with all the various jobs by making the enemies in each dungeon have one or two dominant elemental weaknesses. So, like, if you go into a dungeon and notice that most of the enemies inside are weak to lightning, you’ll likely want to equip Dio and Mel with outfits that grant them lightning-based skills. Personally, I felt that Mel had way cooler costumes than Dio, but that’s just me; I also ended up controlling Rody a lot, and not just because she’s a brown battlemage princess who makes my heart melt like snow in March. She may seem a little slow and awkward at first, but once I unlocked some more skills for her, she ended up being really fun to control.

Overall, Tales of Phantasia: Nari in the Danxx is a decent but ultimately forgettable Tales game. It’s like ordering a Big Mac menu and only getting the fries, which are admittedly well-cooked and the ketchup is not the worst you’ve ever had, but… you’re still sitting there wondering where your Big Mac is, because that’s what you actually wanted to eat. This is a weird analogy. My point is that while the battle/costume system is nice (and Rondoline is Very Nice), at the end of the day, this is still basically just a fandisc with tons of recycled stuff, an underdeveloped world, boring dungeons and a bare-bones storyline that starts unfolding way too late to be able to develop into anything worthwhile.