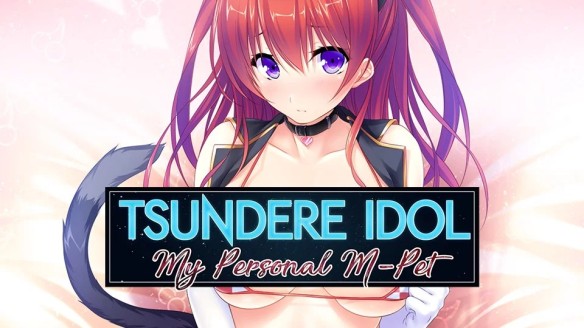 This had a decent premise, but unfortunately, not even my undying passion for ドM girls could make me enjoy it as much as I would have liked. Ironically enough, the Japanese title probably makes the game sound way more exciting than it actually is.

Right off the bat, it’s probably worth clarifying why I called the title misleading, and that’s largely because this isn’t a tsundere game at all. There are no tsunderes to be found here. Look for ’em as much as you like, but you won’t find a single one. Nope. Rui is pretty much in her “perverted M pet” mode from the word go and spends most of the game dere-ing over the protagonist without ever coming even close to classic ばっかじゃないの？！ levels of tsun-ness. If that’s what you want, I’ll happily point you in the direction of the first Bishoujo Mangekyou installment. You’re welcome. 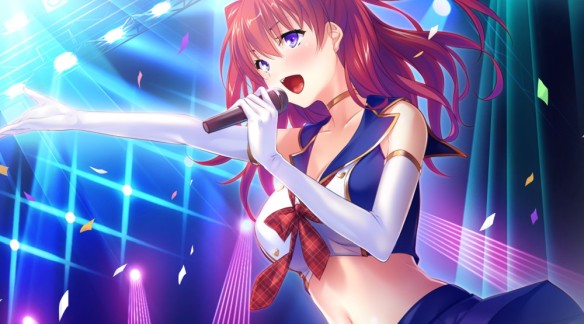 Anyway, the publisher hooked me up with a review copy, which is why I played this in English, but I found the localized script to be… kinda rough, if I’m to be perfectly honest. I mean, it’s not machine translated, so there’s that, but it’s not exactly great, either. For starters, it doesn’t flow particularly well and can feel outright convoluted at times. It also has this habit of switching between past and present tense, sometimes even within the same sentence. Like, sure, you can understand what the lines are trying to say, and not every single one is messy. But on the whole, the script is just not pleasant to read. Here’s one random example and here’s another, just to give you a general idea of what I mean.

So let’s move on to the porn. This game is an extremely short ride (there are a total of 15 HCGs with minor variations), and if it wasn’t for the fact that you’ll probably need to take a quick break for… physical reasons, this could easily be read in one sitting. Now, the ero, even though it works with a premise that tends to make my heartbeat escalate, is kinda bland. Reason #1 is that the artwork, at least by my standards, is pretty average and I didn’t find it all that stimulating. Don’t get me wrong, I still managed to get some use out of a scene or two, but that was more due to Rui’s VA being kinda cute and me using my imagination to spice things up for myself a bit because the actual CGs didn’t really help. 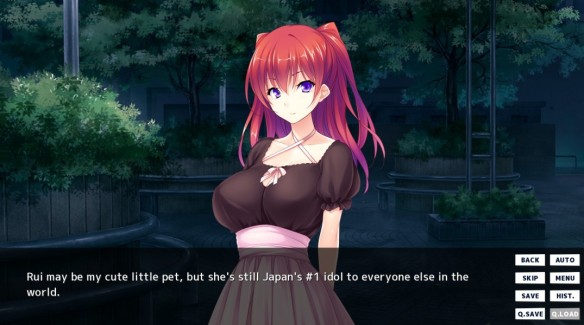 The text/dialogue during the ero is nothing special and uses things I’ve heard a million times before; additionally, Rui is mostly the cute/loving type of M-girl and not the ultra promiscuous, morally depraved cumslut that I personally prefer, so that was a bit of a letdown for me (but may be a positive thing for you if you don’t share my fetish). The ero situations are also comparatively standard and the boldest thing the game does is toss in a bit of salad tossing near the end. (badumtiss) Other than that, you’ll have your vaginal/anal sex, your blowjobs, your paizuris and some pregnancy in the finale, but it all reeks of been-there-done-that. It just wasn’t nearly hardcore/raunchy enough for my tastes. Oh, and despite being a western release, the game retains the pixel-censorship of the Japanese version. Quick audio/technical notes: there are no background moans and no extended sound effects save for a bit of thrusting action that doesn’t loop. To my surprise, the game also lacks an H-scene viewer. There’s a gallery, but all you can do is look at the CGs: you can’t actually replay the ero scenes. The game is short enough for this not to be a huge problem, though.