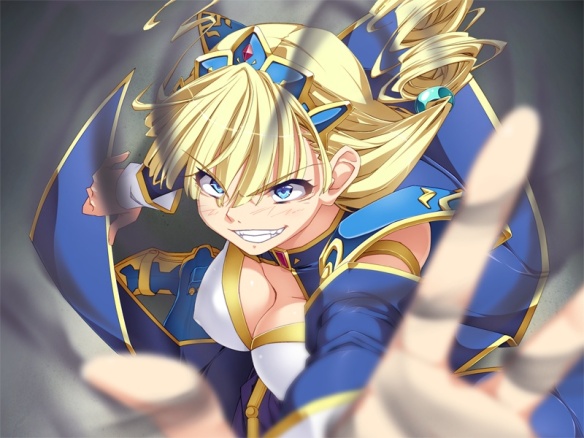 So I read the trial of Trample on Schatten, just to give both myself and the blog a bit of a change of scenery after all the Dies-related stuff as of late. Honestly I haven’t even heard of this VN until I saw it in JAST’s lineup sometime last year, but after reading other opinions of it online, it seemed like something I would enjoy, provided my expectations aren’t super high (they aren’t).

Needless to say, right off the bat, the first 5 minutes are pretty cool. The music that kicks in as the main heroine does her thing is just really awesome, and the whole scene gave me a sort of “I have *no* idea what’s going on but I’m having a blast here” sort of first impression. Since this is basically just a trial, I can’t really tell you much about the story, they obviously won’t include any major twists and such in a short demo — at first glance, it’s the cliché ‘heroines fighting evil shadows’ sort of deal, typical shounen stuff. There are mysterious disappearances going on, and as you would expect, those that disappear end up turning into those shadow monsters. Of course, it could go anywhere from here, but putting that aside, I’m pleased enough with the two heroines included in the demo to not care about that too much for the moment. 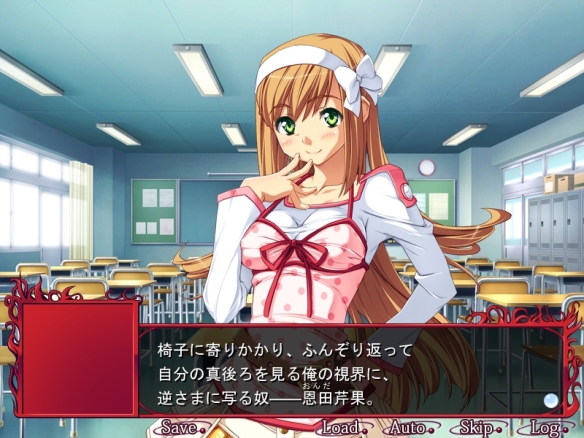 I was also quite happy with the visuals, which, I’ll be honest, is one of the main things that drew me in. Simply put, the CGs and overall character designs are honestly just really pretty: they’re clean, colorful, with ample attention given to details. I believe some of the screenshots around here are evidence enough.

Our main guy is Aisaku, who is basically… well, not super original but I think he’s fine so far. He’s a hotblooded guy who nonetheless seems to have his heart in the right place, going so far as to actually engage in fistfight with Kizaia (more about her later) because she insulted his friends. However, from what I can tell he doesn’t need to go through months of personality shaping training just to be able to man up and act like a proper person (*coughTakerucough*) and is very much reasonable, and just a nice dude all around, evidenced both by a quick bromance scene between him and a male friend, as well as a scene in which he silently comforts a crying Serika. So yeah, that’s my first impression of him. Oh and also he has sex with Kizaia without the usual, drawn-out  “w-w-w-wait a second nosebleed nosebleed” nonsense that you see in so many weak-willed harem MCs. (basically the context is that despite being relative strangers, he has to sleep with her in order not to die, think Fate/stay night and such).

And now for the heroines, only two of which play a prominent role in the trial I read.

First off we have Serika (apologies if I don’t remember family names but the demo isn’t long enough for me to get used to them)*, the energetic and in certain ways kinda weird-but-lovable childhood friend who totally obviously unmistakably has a crush on the MC (long orange-ish hair + green eyes, screenshot above). She also seems somewhat of a tomboy but has a big heart. I really enjoyed her character. Without spending too much time on descriptions, I’ll just say that she seems a lot like Sumika from MuvLuv based just on this demo. Unfortunately Aisaku views her as nothing more than family (she’s an orphan, so they grew up together), which is a massive shame because she does seem like a keeper. Oh well!

Then there’s Kizaia, the main heroine/Saber-lookalike who also seems pretty awesome in her own way, although part of that is just due to my personal preferences. The first of these is that she uses semi-archaic Japanese (using words like “sonata” much like Meiya does in ML), which I find lovely on all possible levels, especially when she’s voiced by the same voice actor as Sakurai Kei from Dies Irae. She appears strong-willed and feisty, but has a cute/easily embarrassed side to her that, I have to admit, managed to hit all my weak points. Also she dive kicks monsters into oblivion like there’s no tomorrow so I expect fight scenes involving her to be pretty cool in the future. You kinda can’t help but shout “you go get ’em, girl!” when the awesome music kicks in and she saves the day.

So far so good, I guess. Two heroines introduced and both are very much to my liking. The game also managed to hit a tight balance between comedic and serious/heartfelt moments, while also throwing a quick fight scene into the mix (with some minor animation, that is, you don’t just read plain text about what’s going on but see character sprites hopping around and such). The end result was that I very much wanted to continue reading when the demo did come to an end. There’s actually more than one trial, but I only really felt the need to read the first one, as I simply didn’t want to spoil the experience by going too far into the story.

So… first impressions? This is the kind of VN where the demo didn’t utterly blow my mind, and in all honesty I don’t expect the final product to be kamige-tier, either, but there seem to be just enough likable things in here to make me consider reading the rest of the story.

2 thoughts on “[Impressions] Trample on “Schatten!!” ~Kagefumi no Uta~”