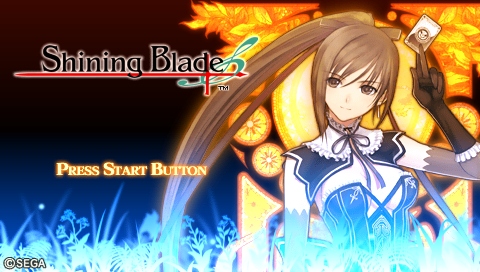 Man, I really wanted to love this game. Trust me, I did. The fact that I didn’t drop it after the first 2-3 hours is solid evidence of that. In any case, I’m getting ahead of myself. Here’s a quick review of Shining Blade for the PSP and why I feel like it’s the textbook example of wasted potential.

The game initially caught my attention for a variety of reasons. One was its fantastic graphics (by PSP standards), vivid and colorful, accompanied by character designs of Tony Taka. I’m also a sucker for fantasy JRPGs, so that was yet another plus. Finally, its battle system was meant to mimic that of Valkyria Chronicles. Having played and enjoyed Valkyria Chronicles 3 a few months before I got to Shining Blade, I had high hopes for this. It was supposed to be a colorful -though probably clichéd- fantasy adventure with Valkyria’s tactical battles and a large cast of pretty girls to engage in dating sim hijinks with. A recipe for success, no doubt.

But things… didn’t quite go as I expected. The graphics were really pretty, the voice acting was all top-notch and while the story was basically one cliché after the other, I was prepared to let that slide. But then the battle system happened. For one thing, the fields themselves are pretty small, but that’s fine, we’re on a handheld system, after all. The thing that does matter, however, is the difficulty. I’ll just say it – the game is insultingly easy, and it is no exaggeration to say that this fact single-handedly ruins the gameplay part of Shining Blade.

Battles require little to no strategy – combat will mostly consist of you running up to the enemy and pretty much killing it with one or two hits, all while barely receiving any damage yourself. You don’t even need to select the right attacks to do the job, just use whatever, it’s going to destroy everything anyway. It’s all rather disappointing, considering it’s basically using Valkyria’s combat engine with such poor execution. If you thought the above was bad, wait until you get mages in your party. They more or less break the game, as they are capable of targeting multiple foes in their field of vision.

There is, of course, a certain amount of JRPG-like customization, as well as the ability to level up and strengthen your characters’ skills, but it’s all rather meaningless. The laughable difficulty makes the feature redundant during most of the game. Speaking of redundant, the same goes for using a different loadout of characters for different battles, since combat is so easy you can basically win most encounters just by using your regular attacks. My advice is to simply pick the characters that are aesthetically appealing to you, then start spamming your way to victory. There are few games where I seriously wonder why the player is even required to be present, and SB is one of them.

Thankfully, and this is only going to be a small consolation, certain characters end up learning the secret art of songstresses during the course of the story, granting the entire party a specific kind of buff with their singing. I’m only mentioning this because it makes the battle music shift to a catchy J-pop song depending on the character doing the singing. That alone made battles slightly more tolerable, and I am not a man who refuses to give credit where it is due.

The cast itself is made up of a moderately likable bunch of stereotypes, be it the tsundere elf girl, the introverted sorceress with a severe case of man-phobia or the moping emo guy who initially appears to be an asshat but is actually a swell guy on the inside (he’s also the protagonist of Shining Hearts, taking place before his days of brooding).You can interact with them on a daily basis and pick from a couple of dialogue choices to win them over, a la Persona 3-4. The interaction with your companions was the primarily feature that kept me going, seeing how the gameplay itself was a trainwreck beyond redemption. If you don’t mind some stereotypes, it’s fairly enjoyable.

There’s really not much else to say. It’s most certainly not the worst game I’ve ever played in my life, and I’ll admit it does have a certain charm to it. But I can’t exactly state with a clear conscience that this is a particularly *good* game, either. If you’re looking for relatively nice anime graphics, some mid-battle J-pop and a large selection of Tony Taka ladies to woo, you might get some enjoyment out of Shining Blade. If you’re primarily interested in tactical, challenging gameplay… you might as well just skip this and never look back.